The more one immerses oneself in the recording, the more one comes to appreciate Forcucci’s attention to detail and how artfully he’s arranged the sounds – Textura Evoking an impending danger by means of his orotund heavy “voice” and his effect on sonic sphere which seems to be covered by a sort of camouflage mantle – ChainDLK The music generates feelings associated with the sense of loss and the act of creation, things that, usually, anticipate the rising of new times – Neural

Vinyl with print on archival paper signed and numbered

De Rerum Natura emerges from field recordings in the Brazilian Amazon rainforest I recorded in November 2008 at the Mamori Art Lab. The environment is dense with sonorities; it absorbs and influences the beholder/listener while soundwalking, spotting locations or recording. The ears and the mind are fully dedicated to listening, leading to vivid mental imagery. The sonic does not carry its reality within itself but is comparable to a symbol that triggers ‘virtual’ reality in the mind of the listener.
The Amazon rainforest is so remote that one can concentrate only on the recording task with absolute dedication. The experience is so intense that the sounds become deeply engraved into one’s mind. The powerful images created by the sonic environment while recording and Deep Listening create the composer’s initial mental images. The final resulting imprint is the story told by the Amazonian space

This week, I am part of the ELIA Biennale at the Zürich University of the Arts in Switzerland. ELIA is a globally connected European network that provides a dynamic platform for professional exchange and development in higher arts education https://elia-artschools.org/page/ELIABiennialHomepage

The artists-in-labs (AIL) program has a long history of bringing together artists from various disciplines with scientists from diverse research institutions. These cross-border and transdisciplinary collaborations are intended to engage opportunities that expand contemporary knowledges and artistic production.

The piece is part of the exhibition

This week i should have been in New York for the electroacoustic music festival to present my piece Alerta! Well, I am not there but as many things went online, this festival too. So you can find the piece in the concert number 13

In the Autumn of 2018, i was in the Nordeste of Brazil for research. At the Federal University of Bahia, we organised an art and science Laser Nomad art talk with Dr Paola Barreto and Dr Bárbara Carine . So great to find it transcribed here in the Metamorfose Journal ! A conversation between Science and Art: about epistemologies & poetical and political imaginations – Salvador,November 29, 2018. #artandscience #technology #poeticalandpoliticalimaginations #epistemologies #ufba #ihacdigital https://portalseer.ufba.br/index.php/metamorfose/issue/view/2021

The piece Bodyscape is selected by Francisco Lopez to be presented at Museo Nacional Centro de Arte Reina Sofia in Madrid for the exhibition Audiosphere: Social Experimental Audio, Pre- and Post-Internet. It will be held from May 27th to September 14th with many other artists. I believe this is a milestone for sonic arts curation.

The track E from the album B(L)(E)(E)(N)DINGS is included within this excellent and important compilation on the syrphe label. 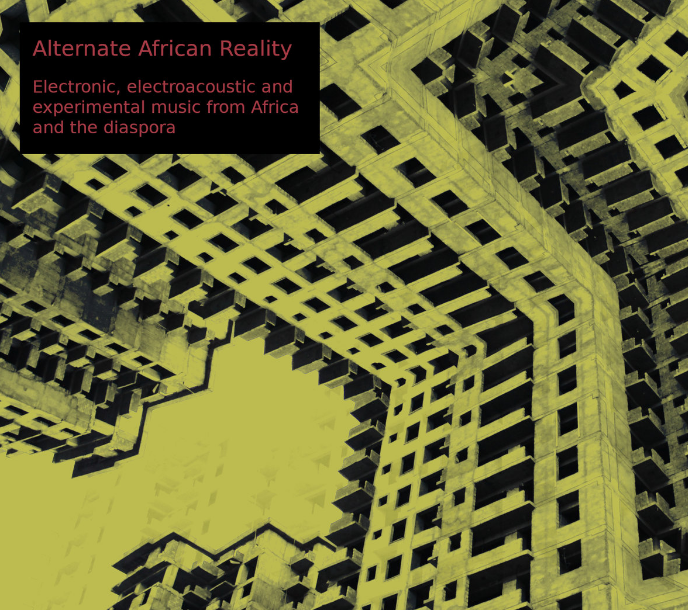 Curation of a pavilion for The Wrong Biennale

Finalist of the Luigi Russolo Prize 2019 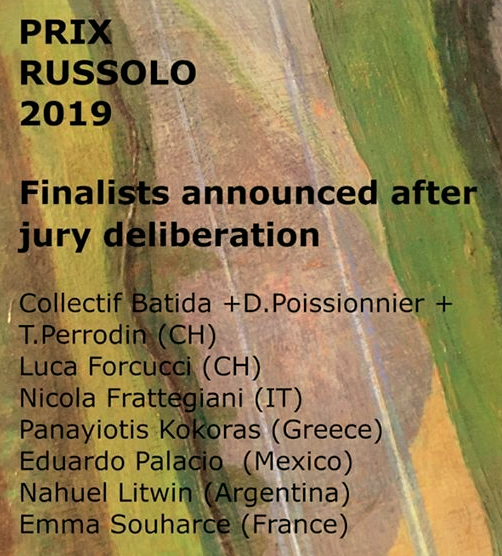 Leonardo Laser Talks in Berlin on July 18 6.00pm / talking about dreams and realities 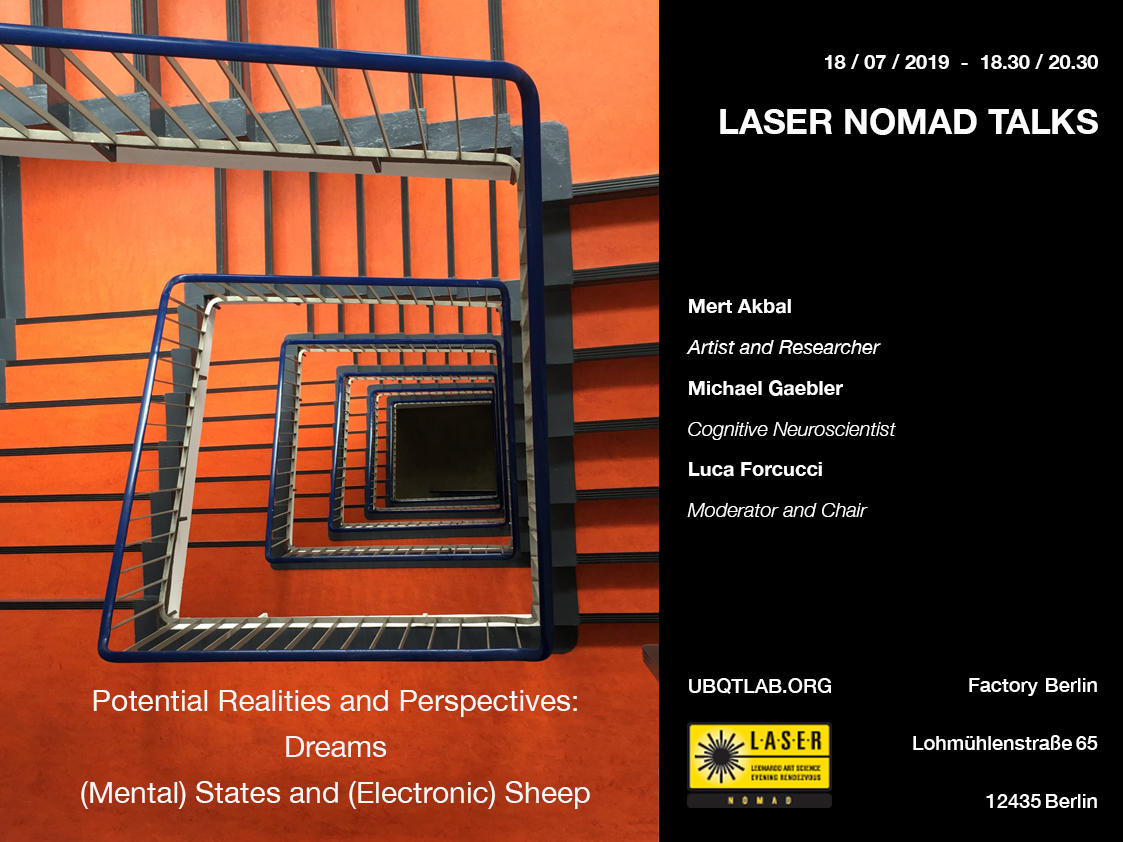 New series of podcasts from my project ubqtlab.org in collaboration with creative disturbances available here with the iconic Phill Niblock

New album is out (Bis) / Bodyscape

on my bandcamp site

on my bandcamp site

Proprioception in Visual Mental Imagery of Spaces while Deep Listening

30.10 -1.11 Presentation of lectures, workshop and concert about listening, nomadism, and visualization at University of California Riverside.

During the last months, I worked on a new collaborative project named LASER Nomad with Leonardo/ISAST.  The first result is a conference and festival of electroacoustic music with the South African college of music at the university of Cape Town. June 18-20.

Starting a 10 days tour in South Africa on June 14, from Kalashnikovv Gallery in Johannesburg to ISEA 2018 Durban.

looks like my work is travelling more than me, and to places where I never been: while I am cosy in my Berliner studio, next month, my piece Blending (seas from south and north hemispheres) will be in Reykjavík.

Two Poles, an electroacoustic piece blending waters from the South and North hemispheres during the Anotações Sonoras: Espaço, Pausa, Repetição Exhibition at oMuseum in Porto from March 23 to end of June.

Voices from the Coalmine, an electroacoustic piece based on autism, will be presented within res·o·nant, a sound installation from Mischa Kuball, as a 60-second-long sound clip – so-called Skits at the Jewish Museum in Berlin from March 23 to Summer 2019.

Two Poles is an electroacoustic piece that was presented at Gallery Nord in Berlin, it will be presented next Spring and Summer.

The loop is closed with Bodyscape presented at EPFL Artlab. The research started in 2009 at the Brain Mind Institute with a residency.

Traveling to Bangalore from 05 to 12 october for a tailored TedX and I will be developing new projects with new partners. This is my first time in India !

Keynote for the ISSTA International Festival and Conference on Sound in the Arts, Science and Technology (ISSTA 2017). Dundalk / September 7-8

Realities, appearing as multiple layers and folds in which memories, cognitions, perceptions are coined and ready to emerge.

How to root your field recordings symphony firmly in INA-GRM territory? Well, let’s start with the rumbles of a passing train, in homage to Bernard Parmegianni… Or, do we hear something different than carriages on tracks? Luc Forcucci’s The Waste Land navigates the thin line where aural realities and sonic distortions and manipulations are crossing, merging, converging. He plays tricks on the memory for sound(s); cognitions thereof and the perception of space and time by inviting the ear towards examination of familiarities, while – at the same time, even – layering these habitual aural surroundings with alien noises, crackling static and displaced or disembodied emergences in multiscapes of sounds.
Following the lead of the ‘Giants of the GRM’ Forcucci dives deep into the sound matter at hand. The composer was invited to produce a soundtrack for a documentary movie. But, he didn’t have any information as to the nature of the moving picture. Forcucci was only given around six minutes of field recording to work with. And that too came without any further context. Deep listening brought forth images which formed a mental movie for Forcucci. The Waste Land is his soundtrack for exactly that inner motion, aurally pictured.
Forcucci manages to project clear images out of the fogs of sounds he juxtaposes. With Voices from the Coal Mine he works the resonant properties of real, tactile spaces into recombinant virtual ‘rooms’, taking cues and inspiration from Alvin Lucier. The piece also ushers in vibrant and touching memories of the miners and their voices – stretched out, drowned out, purified to base resonances. The deep darkness of Forcucci’s sonic excavations brings to mind Pietro Riparbelli’s explorations of resonance and reverberations.
With the last work on the tape Forcucci’s ear bridges nature on the coast of Normandy (matter of factly recorded and presented like Chris Watson) and urban flâneur sound walking through the city of Paris (not unlike BJ Nilsen’s London work Eye of Microphone). Reporting and observation with Forcucci’s keen ear – again – questions the listener’s habitual modes of hearing verging on listening and therewith anchors itself firmly and with bravura in the formidable lineage of the INA-GRM. (SSK)
— Address: http://www.cronicaelectronica.org/

In residency in the Lofoten Islands. Preparing new projects for 2017…. and walking the walk… a lot.

Outcomes of the one month scientific delirium madness 2.0 residency in San Francisco California, conducted from June to July 2015. Published in Leonardo Journal June 2016.

In Sao Paulo in residency at the Red Bull Station working on new projects and presenting work in Brazil until end of July.

In Olso developing work at NOTAM with support from Vandaler Residency

Interview for the Swiss Radio and a Swiss TV for Bodyscape.

Presented on January 22 2016 at Centre Dürrenmatt in Neuchâtel / Switzerland 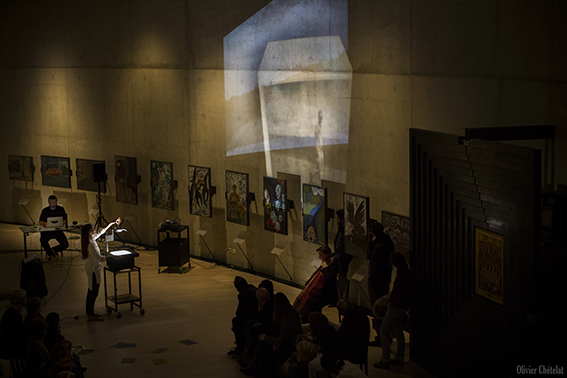 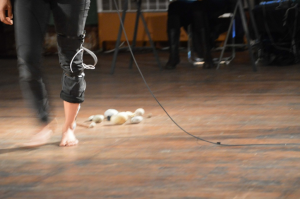 Honoured to be part of this residency organised by Djerassi Foundation and Leonardo Journal. ‘Our admission panel has selected the 2015 residents from over 225 applicants.

From the series ‘I can’t go Back to Yesterday Because I was a Different Person Then.’ Picture Published in Transnational Dialogues Journal / November 2014 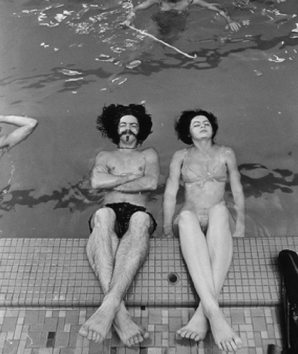 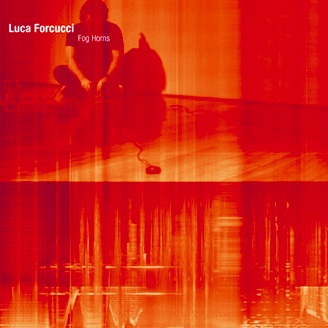 Released on Subrosa records  1. Fog Horns 2. L’Ecume des Jours 3. Winds After 12 hours of flight and some sleep deprivation, I landed in San Francisco in Spring 2011. Because or thanks to my state of consciousness, a distinct and beautiful sound appeared. It took a while to understand if that was real or just my imagination: The sound of the fog horns. Later, after emerging from my own fog, I drove thru Big Sur to Los Angeles on the Highway one. The sound haunted me while driving and I quickly heard it again when back in San Francisco. I went closer to the horns, (sound) walked and recorded sonic material on the coast. The results are imaginary landscapes recombined as a road movie. The material was then composed in Berlin during the summer of 2012 at the studio of T.U. University in Berlin and at Atomic Baby studio, where turntables, scratch, cuts and echoplex (by Goo Le Gooster) and electronic cello (by Michael Kott) were added.

Delighted to somehow start again. Next month, June 2, I will give a talk about my research linking sonic arts and neuroscience with Jo Wei, Curator, researcher, and founder of Pan Bio-art Studio. All welcome ! (It s online and safe)

Alerta ! is a poem of the Brazilian author Oswald de Andrade about dictatorship during the 1960-1980’s in Brazil, resistance and love; the composition is a process based work: The poem told by the composer Jorge Antunes was recorded in Recife (Br); graphic scores were then given to a cellist (Noémy Braun), and a percussionist (Lucas Gonseth) in La Chaux-de-Fonds (CH); the resulting material was recorded and recombined, brought forward in Switzerland, in Portugal, in the USA, until its unknown final form.

The recent compositions Alerta ! will be presented mid June at the New York Electroacoustic Music Festival 2020. The work is based on a poem from the Brazilian author Oswald de Andrade.